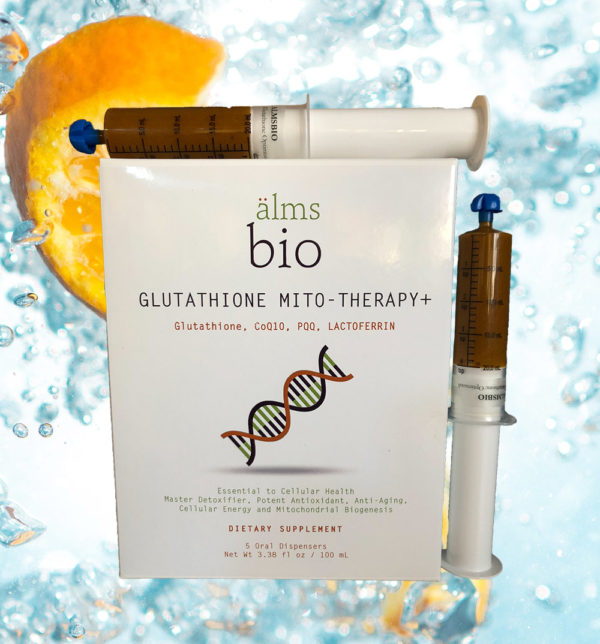 Glutathione is the only super-supplement of its kind and a master antioxidant. A powerful anti-aging cocktail considered “the mother of all antioxidants”; CoQ 10-an essential for boosting the energy output of your mitochondria; and, PQQ (Pyrroloquinoline quinone) – a vital nutrient supporting mitochondrial biogenesis (the birth of new mitochondria). Glutathione’s purpose is to protect and support cellular function and cellular health from the ravages of cellular damage from free radicals.

Liposomal Glutathione with CoQ10 and PQQ

How Many Servings is One Box

There are five syringes per box, and there are four servings per syringe for a total of 20 servings which is enough for a 40 day period for one person.

How Often Should I Take Liposomal Glutathione?

Our physicians have recommended taking one dose every other day- this makes it a 40 day supply. We also have many people that like to take it on a daily basis- this is fine, too.

How Should I Take Liposomal Glutathione

This product can be taken with or without food any time of the day. Please store in a cool dry place. It doesn't have to be refrigerated but should remain at ambient temperature. 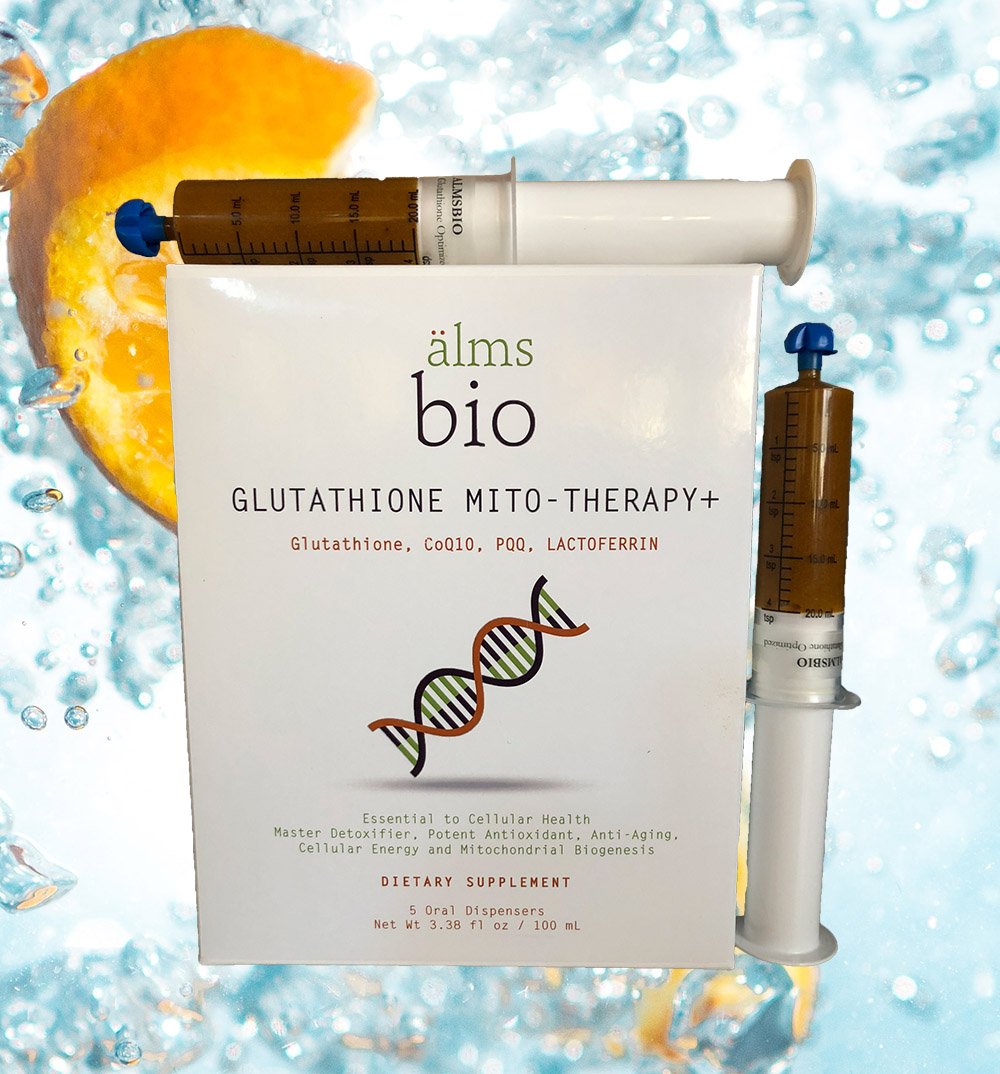 The “why” behind Glutathione presented in a “liposomal” formula. Remember we said that glutathione is a combination of three amino acids: Glutamine, Glycine, and Cysteine – it just so happens that when glutathione is taken orally, the amino acids are broken down in the stomach and absorbed as individual amino acids. While it is possible that they could join up again, the reality is that we can’t guarantee that the amino acids won’t be used for other purposes in the body. By putting the Glutathione in a liposome, it creates a stabilized formula – stabilized glutathione - that can make its way through the stomach and into the intestine and absorbed intact. Basically, the liposome protects the amino acid group by encapsulating it in a microscopic lipid sphere. Then glutathione is able to travel through the digestive system supporting intact uptake and bioavailability. This is the most efficacious way to take glutathione in supplement form.

Glutathione is actually produced by the body and is made up of three amino acids: glutamine, glycine, and cysteine. Glutathione is considered the Master Antioxidant in the body and its purpose is to protect and support cellular function and cellular health from the ravages of cellular damage from free radicals. So, while our bodies actually make and recycle glutathione, it is noteworthy that due to a number of everyday factors, Glutathione levels in the body may be reduced. Unfortunately, toxic factors such as exposure to a barrage of environmental stressors (e.g. blue light, EMFs, 5g), environmental toxins (e.g. daily air pollution, industrial chemicals), poor food choices (e.g. highly processed non-nutritive foods, high sugar), drug/prescriptive use, alcohol, and physiological / psychological stressors (e.g. work/life balance, health stress, relational stressors, to name a few), all contribute to a reduction in glutathione levels and lead to oxidative stress – think cellular damage – think cells don’t work at their optimal potential when damaged.

CoQ10 (coenzyme 10) is also an antioxidant that plays an essential role in the creation of cellular energy. CoQ10 plays a role to facilitate the transfer of electrons along the electron transport chain, which is where energy in the mitochondria is created and ultimately yields an output of ATP – aka our cells “energy currency.” It is noteworthy that CoQ10 is also highly protective to mitochondria function as it helps to neutralize free radicals and oxidative damage to DNA. High levels of CoQ10 are found in the heart, brain, liver and kidney… eyes, nerves and muscles. CoQ10 is thought to peak in our 20’s and then start its decline over time.

PQQ (Pyrroloquinoline quinone) is essential because the body cannot make its own so it must be obtained via dietary sources. PQQ supports the body’s ability to make (upregulate, or birth) new mitochondria — mitochondria are the “powerhouses” of the cells. As we age, cellular mitochondria decline affecting overall cellular energy and contributes to aging. PQQ is important for energy output of the mitochondria, as well, it is a powerful antioxidant protecting cellular health in tandem with glutathione.

Glutathione with CoQ10 and PQQ

To wrap this up – MITO Therapy + is a synergistic blend of Liposomal Glutathione + CoQ10 + PQQ, designed for enhanced uptake and absorption which is created to support the integrity and health of the mitochondria, thereby supporting optimal cellular function and overall health and wellbeing. FEEL THE DIFFERENCE!

Over 100,000 Clinical Studies on Glutathione

Support Cellular Function on all levels to reduce cellular aging.
2

Glutathione is one of the body’s most powerful detoxifiers.
3

Oral supplementation of liposomal glutathione is shown to increase body stores of glutathione.
5

Support the creation of new mitochondria in your body.
9

Support your cells from oxidative damage.
10

Naturally increase your cell health at the cellular level.
11

Help boost and increase the production of energy in your cells.

This is perhaps the most potent antioxidant for longevity, reducing oxidative stress, fighting auto-immune disease, caring for your skin, support antioxidant of free radicals, support enhanced and appropriate cellular energy, and support mitochondrial health and biogenesis of new mitochondria – this product is for you!

Glutathione is one of the most powerful substance for total body detoxification, and cellular protection, and rejuvenation. This is a staple supplement for me to support my immune system in a time where we all need extra support. Almsbio has a unique and synergistic blend of nutrients, one of which is glutathione, in a liposomal form designed for optimal bioavailability.

One of the reasons I love the Almsbio Glutathione is that it’s blended with PQQ and Co-Q10 – all which work synergistically to support cellular health – and this is where every story of life begins. So, Glutathione, PQQ and Co-Q10 product from Almsbio is one of my go-to’s. Think, nourish, protect, birth, energize our cells in a way that supports the best health outcomes for you and me!

Glutathione Mitotherapy
The Super-Supplement for Anti-Aging

Why are Ben Greenfield and so many others, including medical practitioners, so impressed with this amazing Super-Supplement? Easy to answer! It’s the only super-supplement of its kind. A powerful antiaging cocktail consisting of GLUTATHIONE – considered “the mother of all antioxidants”; CoQ 10 – an essential for boosting the energy output of your mitochondria; and, PQQ (Pyrroloquinoline quinone) – a vital nutrient supporting mitochondrial biogenesis (the birth of new mitochondria). Anytime we get new mitochondria, it’s a good thing!

There have been over 100,000 clinical studies on this amazing molecule!

It’s one of the most important molecules in our bodies – playing a critical role to the body’s natural defense system at the cellular level. Glutathione is a sulfur-rich tripeptide made up of three amino acids, cysteine, glycine, and glutamate. It is the key antioxidant in our detoxification pathways, and plays a critical role in maintaining cellular health by helping to prevent cellular damage brought on by oxidative stress, free radicals, heavy metals, environmental toxins, and even helps to protect from the effects of electromagnetic radiation. Glutathione also supports regeneration of other antioxidants like Vitamin C. GLUTATHIONE is important!

Our bodies actually make and recycle glutathione. Unfortunately, due to the heavy toxic overload of our environments, including the high exposure to electromagnetic radiation, poor food choices, drugs and alcohol, trauma, chemical exposures and other stressors, our bodies are often depleted of necessary glutathione. Depleted glutathione levels leave you at risk for poor cellular damage from oxidative stresses and free radicals, lower immune function, and reduce your body’s ability to detoxify appropriately. Deficient Glutathione creates a perfect storm for mitochondrial (the powerhouse of your cells) damage and increased risks associated with mitochondrial dysfunction. Keeping optimal levels of glutathione is essential to your health.

A diagram showing the diseases with DOCUMENTED links to "Low Glutahione" 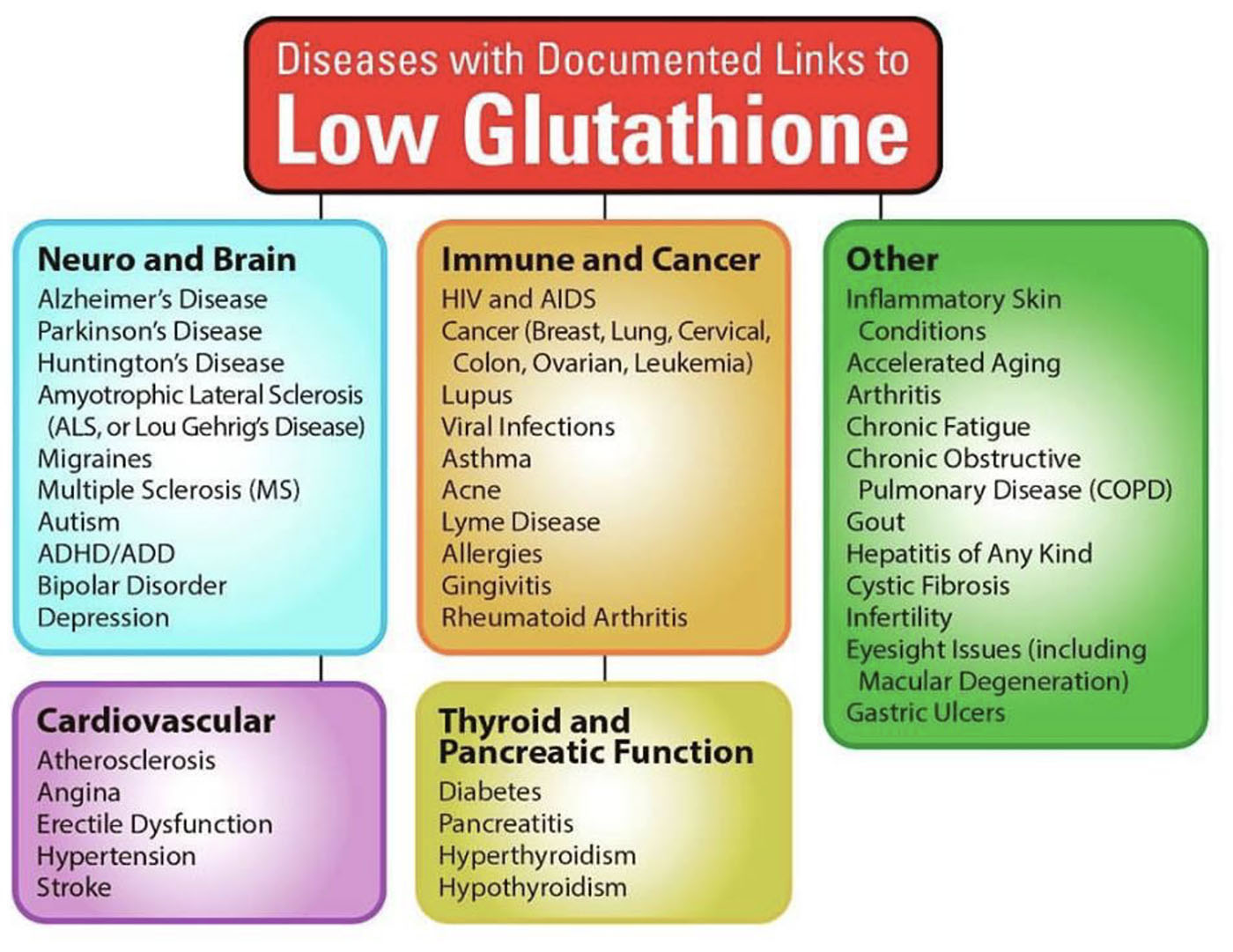 Coenzyme 10 is a powerhouse antioxidant.

Coenzyme 10 is a powerhouse antioxidant that plays an essential role in the creation of cellular energy as well as supports the integral health of your mitochondria. CoQ10 is necessary to facilitate the transfer of electrons along the Electron Transport Chain, which yields an output of ATP – or “cellular energy.”

CoQ10 is also highly protective to your mitochondrial function and helps to neutralize and reduce free radical and oxidative damage to your DNA.

High concentrations of CoQ10 are found in the heart, brain, liver and kidneys. Research reports CoQ10 to be protective of other body tissues as well, such as eyes, nerves and muscle tissue. Levels are thought to peak around 20 years of age, after which levels start to decline. There is some research that suggest that the protective qualities of CoQ10 may also support and increase in lifespan. 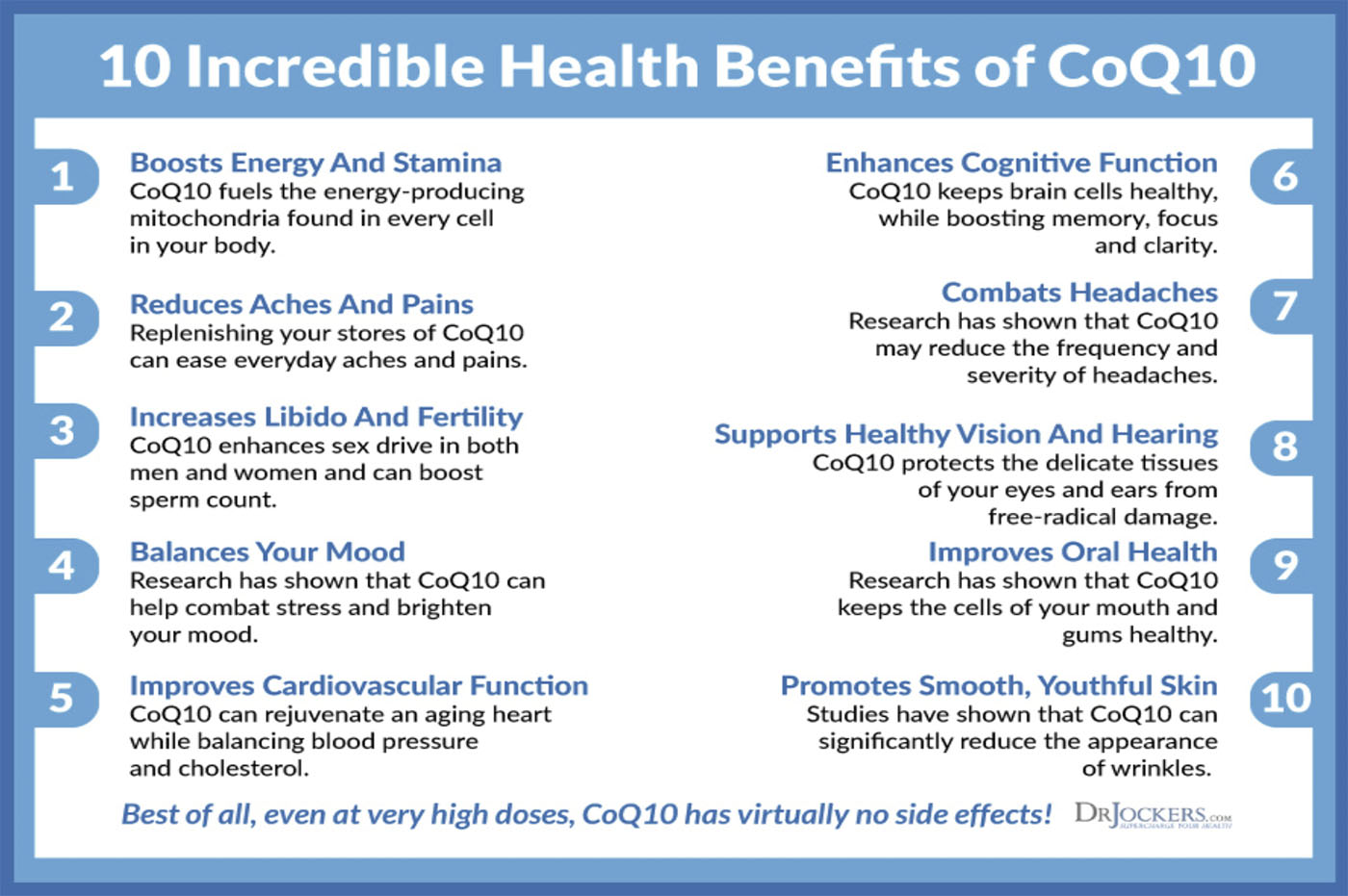 PQQ is an essential micronutrient

Even though PQQ (Pyrroloquinoline quinone) is not currently considered a vitamin, it is an essential micronutrient that supports your body’s ability to make new mitochondria. It is “essential” because the body cannot make it on its own, so must get it from dietary sources. It is thought that the nutritional requirements for PQQ are in line with the nutritional requirements for Folic Acid. Some actually refer to PQQ as the ultimate “anti-aging” vitamin!

While PQQ can be taken on its own and is effective by itself, it works synergistically with CoQ10. There are clinical studies on improving brain function that show PQQ to work more effectively when combined with CoQ10. That’s one of the reasons we’ve combined them here in this amazing formula. Glutathione, CoQ10, & PQQ all work together to enhance nerve growth, support cognitive learning and support optimal cellular health.

Why we put MITO-Therapy in the form it is in...

Glutathione is a challenge to formulate in a way that it is effective and can be absorbed as whole glutathione. We’ve worked to create a formula that is stable, that is easily absorbed, has low odor, and has great taste.

Stability, absorption, and taste/smell has been designed using a patented and patents-pending technology called DPTechnology. With DPTechnology we can work with lactoferrin (an iron-binding molecule) and the bioactive peptide, Glutathione, putting them into a combined matrix that is then put into a liposome creating “Liposomal Glutathione.” To this matrix we added CoQ10 and PQQ. We also us a proprietary process that involves potassium bicarbonate which displaces oxygen (oxygen oxidizes the product) and thereby supports the quality and integrity of the product. The result:

A stable Liposomal Glutathione/CoQ10/PQQ supplement that when taken is able to travel through the stomach to the intestines intact, supporting Enhanced Absorption. This is an amazing and effective supplement that’s easy to take. YOU’LL FEEL THE DIFFERENCE!

Side Note on Lactoferrin: Because of lactoferrin’s ability to bind iron molecules, lactoferrin supports your immune system and gut/digestive health. When iron is bound in the gut, the “bad” bacteria can’t go through a process called “Cellular Respiration.” Cellular Respiration is needed for these bacteria to thrive and expand, so removing their life source is important to supporting gut health.

Our mission is to create the world’s best natural supplements using bio-available ingredients to give you the products and information you need to take control of your health, without the deception that’s so common in the supplement industry. We are actual clinicians and health enthusiasts who always work with YOU in mind.

Our mission is to create the world’s best natural supplements using bio-available ingredients to give you the products and information you need to take control of your health, without the deception that’s so common in the supplement industry.